This Naval Battle Could Have Changed the Course of WW2 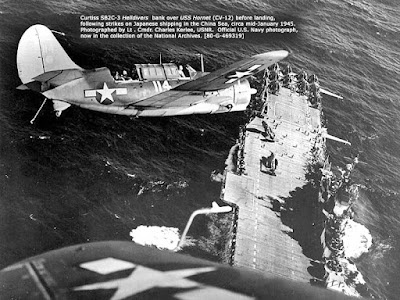 If the Battle of the Philippine Sea had played out differently, Japan’s navy might have been decimated by June 1944.

The battle involved 15 American aircraft carriers deploying some 900 aircraft on one side and nine Japanese flat-tops with about 450 planes on the other. When the smoke had cleared, three Imperial Japanese Navy (IJN) carriers lay at the bottom of the sea, with barely over 30 aircraft left on the decks on the remaining six flat-tops . In stark contrast, the U.S. Navy did not have a single flat-top sunk or damaged and suffered combat losses of 30-odd planes.

The Battle of the Philippine Sea is one of the largest naval encounters of World War II, but has often been overshadowed by other more illustrious fleet-on-fleet clashes of that particular conflict, especially the Midway and Guadalcanal campaigns preceding it, and the Battle of Leyte Gulf following it. The June 19-20, 1944 engagement is the last of the five carrier-versus-carrier clashes of the Pacific War, and it came about as the IJN sallied forth to contest Operation Forager – the American amphibious assault on the Mariana island of Saipan on June 15.

Controversy
The battle that ensued is arguably more noted for the “Great Marianas Turkey Shoot” of June 19, 1944; what is less often mentioned is the fact that the commander overseeing Forager – Fifth Fleet’s Admiral Raymond Spruance – has since been severely castigated for his caution during the battle. On the night of June 18-19, he received conflicting information that made him believe that his adversary was aiming for an “end run” so as to attack the beachhead at Saipan. He therefore chose to have the fast carrier component of the Fifth Fleet – the powerful Task Force 58 (TF 58) – covering Saipan. This resulted in a large proportion of the Japanese Mobile Fleet running away to fight another day – with potentially deleterious consequences four months later during the Leyte operation.

The controversy in the decades since the Battle of the Philippines Sea has revolved around these questions: Was Spruance too cautious? Should the Americans have gone westwards toward the Mobile Fleet instead of letting the Japanese come at them? This then begs the question: What if Spruance had been more aggressive and sent TF 58 after the Mobile Fleet on June 19? Would the subsequent battle have changed the course of the war?

Who would be able to attack first?

It is worth noting that even if Task Force 58 sought battle with its Japanese counterpart on the 19th, the latter would still be in a position to attack first as per the actual event. This was because Japanese carrier aircraft, with a range of over 300 miles, had much longer “legs” than the American ones, which could optimally hit targets 200-250 miles out. Moreover, Japanese reconnaissance capabilities were superior, and this meant that the Mobile Fleet was likely to find and attack TF 58 first, but not the other way round unless the Americans launched a truly vigorous search effort, as well as made significant headway toward the enemy during the night of June 18-19.

How would the aerial battle pan out?
Hence even if Spruance were to pursue the enemy from the start, the Mobile Fleet, by virtue of its longer aerial striking reach, would still be able to keep its adversary at arm’s length in the early stages of the June 19 encounter, and this would be the state of affairs until the Americans could close the distance between them and the Japanese.

This then raises the question of whether the so-called Turkey Shoot would have occurred. The climactic aerial battle of June 19, 1944 happened largely because Task Force 58 were solely focused on defense that day. Had the Americans gone after the Mobile Fleet instead, it is conceivable that the aerial battle that ensued would not be as dramatic. After all, TF 58 would then have had to split its aircraft between the combat air patrol (CAP) and attacking the Mobile Fleet.

Furthermore, in terms of the CAP, the Americans had to deal with not just enemy carrier-based planes, but land-based ones from nearby Japanese-held islands like Guam.

Notwithstanding this, the qualitative disparity between Japanese and American aviators as well as aircraft would still point to a decisive victory in the air for the United States. To illustrate, in June 1944, the average U.S. naval aviator had at least 525 hours of flying time compared to his Japanese counterpart’s 275.

Moreover, the American Hellcat outclassed the IJN’s mainstay “Zeke” fighter. That being said, American aircraft losses in combat would admittedly be much higher than the 30-odd actually incurred on the 19th.

Would U.S. carriers be sunk?
Because of the diversion of resources to offense, esteemed naval historian Samuel Morison maintained that some American carriers would have been sunk had Spruance been more aggressive on June 19. This is highly debatable as U.S. flat-tops would – coupled with superb damage-control capabilities – later prove themselves to be extremely sturdy platforms in the face of the suicide aircraft threat. Indeed, only a single American fast carrier – USS Princeton during the Leyte operation – was sunk by enemy action during World War II.

Having said that, the prospects of the Mobile Fleet attaining “mission kills” of TF 58 flat-tops were also limited, to say the least. To be sure, the Japanese achieved a number of “mission kills” vis-à-vis U.S. fast carriers later in the conflict, but it is worth noting that these were attained via the “precision-guided” kamikaze. Considering the parlous state of Japanese carrier aviation in June 1944, it would have needed a very healthy dose of luck for the Mobile Fleet to get in more than a few hits on TF 58 via the conventional mediums of dive- and torpedo-bombers in order to get mission kills on the U.S. carrier force.

A more complete victory
By the time Task Force 58 got into a position to attack the Japanese, it is conceivable that the American force would have repelled a number of air strikes, severely weakening the Mobile Fleet’s aerial capabilities. And if TF 58 could strike its adversary on June 19, 1944, it is likely that the Battle of the Philippine Sea would be discussed by historians in the same vein as other overwhelmingly decisive naval encounters, like the Battle of Salamis or the defeat of the Spanish Armada. In other words, the Battle of the Philippine Sea would not be an incomplete victory a la the Battle of Jutland, where the British let the bulk of the German surface fleet escape unscathed.

Indeed, in this hypothetical encounter, the Mobile Fleet – or at least most of its heavy units – would probably be decimated by Task Force 58’s carrier planes. After all, while TF 58’s sole strike on the Mobile Fleet that occurred on the 20th was relatively haphazard, the attack nevertheless yielded a commendable return of fleet carrier Hiyo sunk, Pearl Harbor veteran Zuikaku and battleship Haruna heavily damaged. Had TF 58 attacked its adversary a day earlier, the Japanese would arguably have suffered much heavy losses given that the Americans would be able to execute multiple strikes on June 19 and thereafter.

All that being said, hypothetical U.S. strikes on June 19 would likely have severely damaged many enemy ships, but not sunk them outright. This is because the Americans seemed to have imbibed the wrong lessons from their crushing victory at the Battle of Midway. In that encounter, four Japanese flat-tops were dispatched to Davy Jones’ Locker largely due to bombs, and the U.S. Navy would set great store on the use of bombs in the anti-shipping role thereafter. This was evidenced in the fact out of the 54 Avenger torpedo planes involved in the actual June 20 attack on the Japanese fleet, only a few carried torpedoes while the rest toted four 500-pound bombs each.

Postulating from this, it is highly conceivable that any U.S. strike during the 19th would, too, have focused on the use of bombs rather than torpedoes. While bombs are effective in their own right, they are not as ideal a weapon for the anti-shipping role compared to torpedoes. This is because unless the bomb detonates in the enemy ship’s magazine, it does not cause as much catastrophic damage – especially structural – unlike its underwater counterpart. Bearing this in mind, hypothetical American attacks of June 19 would have damaged several Japanese vessels and slowed them down, leaving the way for the “black-shoed” – read: surface warship-centric – Spruance to send in his surface component to deliver the coup de grace.

Possibility of a surface battle
It is worth noting that an encounter of this nature took place four months later during the Battle of Cape Engano, one of the constituents of the Battle of Leyte Gulf. There, Admiral William Halsey deployed a cruiser-destroyer unit against Admiral Jisaburo Ozawa’s Northern Force after the latter had been seriously weakened by carrier air attacks. Thus with various Mobile Fleet units damaged and rendered less maneuverable by bombs, the way would be paved for Spruance to deploy his beloved “heavies” against the cripples of the Japanese navy. As a matter of fact, he had on hand a total of seven modern battleships, including two of the powerful Iowa-class vessels, for an old-fashioned surface slugfest. Count the two Yamato-class super-dreadnoughts amongst the Japanese cripples, and the stage would be set for the salivating encounter that has fascinated naval enthusiasts in the decades since the end of the Pacific War.
Concluding thoughts

More than 70 years have passed since the Battle of the Philippine Sea and World War II aficionados are still debating Spruance’s decision on message boards and other platforms. The battle broke the back of Japanese naval aviation and concomitantly that of the IJN as well. However, critics argue that while the battle was decisive, it was “not decisive enough” as most of the Japanese surface fleet escaped to fight another day.

All in all, it can perhaps be argued with at least a fair degree of certainty that a more aggressive Spruance during the Battle of the Philippine Sea would bring about a “more decisive” outcome and herald the death knell of the Imperial Japanese Navy four months earlier. The Japanese fleet thus decimated, there would be no Battle of Leyte Gulf. And suffice it to say that with the need to wrestle for sea control gone, the U.S. carrier force could then focus on power projection overland.

The interesting question then would be to what extent could U.S. war plans against Japan be accelerated. It follows that the world might be a different place today had Admiral Raymond Spruance done things differently on June 18-19, 1944. But until the day a time machine is invented and the admiral can be forewarned of the repercussions his decision would bring about, the question of “What if Spruance had been more aggressive during the Battle of the Philippine Sea?” will always remain one of the most intriguing counterfactuals of military history.

Ben Ho Wan Beng is a Senior Analyst with the Military Studies Programme at Singapore’s S. Rajaratnam School of International Studies, and has published with the likes of The Diplomat, USNI News, and The National Interest. While contemporary naval affairs are Ben’s main research interests, World War Two naval history will always have a special place in his heart as it reminds him of his childhood days reading up on, among others, the Battles of the Eastern Solomons, Santa Cruz, Cape Esperance, and Bismarck Sea.

Posted by Mitch Williamson at 4:05 PM No comments: