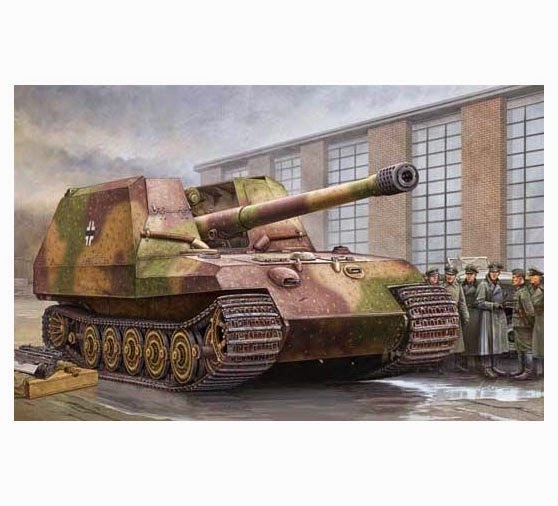 
In November 1942, Krupp received order to design the vehicle (waffentrager) using Tiger II components, which was to be part of the "Grille" series. It was to be able to mount 170mm Kanone 72 L/50 gun which could deliver a 68 kilogram projectile up to 25500 meters in range or a 210 mm "Mörser" (a howitzer actually) with a maximum range of 16500 meters firing a 111 kg shell. Grille 17 had its armament mounted on the rail platform inside the hull allowing it to be dismounted at any time and used independent of the actual tank itself. The maximum elevation of the main gun was 65º and its azimuth just 5º at right or left. In order to achieve the 360º fully rotation the gun and its turntable had to be placed in the ground which was folded and carried in the back of the vehicle.

Next in the series was Grille 30. It would be armed with Skoda 305mm GrW L/16 mortar. Project of Grille 42 was under the development. It was to be armed with 420mm Grw mortar.

The lengthened chassis was shaped as the Tiger II but used a much less thicker armor, about 50 mm in the frontal plates and 30 mm at the sides.

Also in order to save nickel the vehicle was designed to use SM stahl which was 130 Kg/ square mm resilient compared with the 150 kg/ square mm of the Nickel alloy.

Each variant was also armed with two 7.92mm machine guns. It would be operated by the crew of eight (driver, commander, gunner, radio operator and four loaders).

The project was halted in February 1945, given the worsening in the war situation, which forced Albert Speer to get rid of any nonessential armored vehicle development.

One prototype with 170mm gun was almost completed in May of 1945, and was captured by British troops at Haustenbeck near Paderborn.